What to see in Olympia & Elis During classical times Olympia was the city of Ilia best known as the area where the Olympic Games took place, the greatest athletic event of the then-Greek world.
Read More Rivers, forests and artificial lakes are waiting for to you discover in Elis. Don't miss out!
Read More Located on a hilltop in the village Castro, overlooking Elis plain, Chlemoutsi castle is one of the most imposing castles in the Peloponnese.
Read More The history of Olympia is known all over the world. Visit the museums of Elis & Olympia and enrich your knowledge.
Read More The monks of the Elisian monasteries are waiting for their visitors to welcome and to guide them in their godsend place. Be one of them.
Read More

About Olympia and Elis

Elis, also called Elea, modern Iliá, is one of the units on the peninsula. It combines the mountain with the sea and boasts beautiful vacation towns, sandy beaches, blue waters and pine trees which stretch down to the sea. The west side of Elis has long sandy beaches including Elia- one of the longest beaches in Greece. The port of Kyllini in the north part of the region provides regular ferry connections to the Ionian islands of Zakynthos, Kefalonia and Ithaki.

These are elements which compose a unique landscape for vacations, sun and swimming, while the most significant archaeological sites (Olympia, Ilis, Temple of Epicurios Apollo) entice tourists from all over the world.

The history of the region of Elis is tightly connected to that of the city Elis, ancient Greek region and the region’s centre in antiquity, well known for its horse breeding and for the Olympic Games, which were allegedly founded there in 776 B.C.

The Olympic Games were celebrated every four years at the sanctuary of Olympia, on the north bank of the Alpheus River. The city of Elis engaged in a long struggle with the Pisatians for control of the games until 572 B.C., when the Eleans decisively subjugated the Pisatians. Having gained control of the entire region by 580 B.C., the city of Elis briefly joined Sparta in an anti-Persian alliance (479), then broke with Sparta, adopted a democratic constitution (471), and became the administrative centre of union of smaller townships. During the Peloponnesian War, Elis again allied with Sparta until 420 B.C., when it defected to the side of Athens. Sparta subsequently punished Elis for its defection by stripping it of Triphylia, and Elis’s attempts to recover the latter were repeatedly frustrated by Sparta and then by Arcadia. But by adroit diplomacy and by emphasizing the sanctity of the Olympic Games (and the neutrality of Elis as the games’ host), the city was able to retain its territory and in some sense even its independence after the Roman occupation of Greece (146 B.C.), only to disintegrate with the collapse of the Roman Empire.

Getting to Olympia & Elis

The capital of the Prefecture of Elia, Pyrgos, is 300km from Athens following the National Highway Athens-Pyrgos.  As an indication, Pyrgos is 97km from Patra, 118km from Kalamata, 132km from Tripolis, 19km from Ancient Olympia and 12km from the port of Katakolo.

Elia has a daily frequent bus connection with the surrounding regions and Athens as well. The buses from Athens depart from the bus station at 100 Kifissos Avenue. Pyrgos also has frequent routes to the villages of the prefecture and all over Greece such as Thessaloniki, Ioannina, Volos and Trikala and Kyllini (to take the boat to Zante), Tripoli, Kalamata and Patra in Peloponnese.
For more information please visit KTEL Ilias (http://www.ktelileias.gr only in Greek language) and buy your tickets online.
Telephone numbers of the most famous bus stops of Elia:
KTEL of Pyrgos: 0030 26210 22592
KTEL of Athens: 0030  210 5134110

The prefecture is connected with the railway network. There are daily trains from Athens to Pyrgos. Passengers should take the Proastiakos Train from Athens to Kiato and there they change and take another train from Kiato to Pyrgos.
For more information please visit the TRAINOSE website (http://www.trainose.gr/en/) and buy your tickets online or make a phone call at 0030 210 5297777 or at the railway station of Pyrgos at the number 0030 26210 22576

The port of Kyllini has a daily ferry link with the port of Zakynthos and Kefalonia, both Ionian Islands.
Port Authority of Kyllini: 0030 26230 92211

The closest airport to the Prefecture of Ilia is in Araxos (Araxos or Agamemnon Airport), which serves civilian flights from northern Europe during the summer.
For more information contact the Araxos Airport at 0030 26930 54000 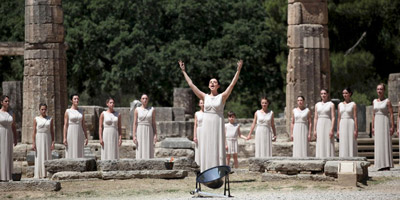 Experience an unforgettable private tour from Kalamata to the famous Ancient Olympia, and feel the Olympic spirit by close!